Pan Macmillan South Africa today announced that Steven Boykey Sidley, award-winning author of Entanglement and Stepping Out, has been signed to the prestigious French publishing house Belfond, which will be translating both books into French for sale in francophone countries. (Belfond is the publisher of French translations of Lionel Shriver, Douglas Kennedy, Shalom Auslander, Woody Allen, Kafka and other notable authors.)

‘The arrival of Steven Boykey Sidley on the South African literary scene has been incredibly exciting with a Sunday Times fiction shortlist and the UJ Debut Award for Entanglement. It was only a matter of time before international publishers started to take notice, and Pan Macmillan is absolutely delighted that a publisher of the stature of Belfond has bought the French rights to both Entanglement and Sidley’s second novel Stepping Out.’ – TERRY MORRIS, Managing Director of Pan Macmillan South Africa

This is the story of Ian Player, internationally recognised environmentalist and conservationist. But Ian is a man of many facets and contradictions, not just a ranger: a man of culture and the arts, a deep thinker and Jungian, an irascible campaigner and a maverick. He is a writer, a lecturer and international diplomat and a deeply committed man to all he believes in. 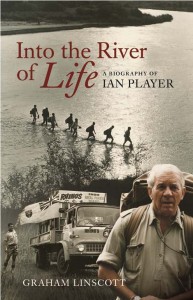 Born in Johannesburg in 1927 and educated at St John’s College, he served with the South African forces in Italy in World War II and returned to South Africa at age 19 in 1946 with no idea of what he wanted to do with his life. When he pioneered the Duzi Canoe Marathon in 1950 he expected to see an abundance of wildlife along the river bank. To his dismay, he saw almost none. And so began an epic journey to fight for nature conservation.

He joined the Natal Parks Board in 1952 and spearheaded two initiatives. With his team they pioneered Operation Rhino, which succeeded in saving the white rhino from extinction and obtained protected status for the Umfolozi and St Lucia Wilderness areas – a first in South Africa and on the African continent. He also founded the Wilderness Leadership School during the troubled days of apartheid, a multi-racial and experiential program, which was to spawn a global network of conservationists committed to saving wilderness and wildlife throughout the world.

His work has been recognised globally and among his numerous accolades he has been awarded Knight of the Order of the Golden Ark and the Decoration for Meritorious Service, the highest civilian decoration in this country. He is also the recipient of two honorary doctorates – Doctor of Philosophy, Honoris Causa from the University of Natal and Doctor of Laws (LLD) (h.c) from Rhodes University. He lives with his wife near Howick in Natal and is the brother of golfing legend Gary Player.

Graham Linscott is a freelance writer based in Durban, who has worked in eleven African countries and developed a strong interest in conservation and the environment. He has known Ian Player for more than 30 years.