The scene: An Indian television journalist is drafted in to lead the setting up of a new 24/7 television news channel in South Africa. The goal: To create a world class news product. 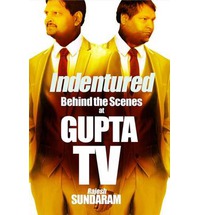 This is the story of the three months Rajesh Sundaram, along with a small team of Indian television professionals, took to launch what was to be the biggest news channel in South Africa. However, this launch was not without its wide range of challenges, catastrophes and social media entertainment. From capricious, micro-managing owners who had a political and commercial agenda to the shocking abuse of staff and violation of laws, finally resulting in a tempestuous and very public parting of ways, Indentured is the true story behind the launch of ANN7 – better known as Gupta TV. This is behind the scenes, disclosing a range of delicious stories about the Gupta brothers, and their relationship with Number 9. And yes; you’ll be told exactly why he is called Number 9.