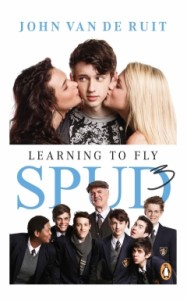 As Spud Milton continues his diabolical stagger through adolescence,he learns one of life’s most important lessons: when dealing with women and cretins, nothing is ever quite as it seems.

‘I’m practically a man in most areas,’ writes Spud confidently on his sixteenth birthday. The year is 1992 and, as always in South Africa, radical change is in the air. The country may be on the bumpy road to an uncomfortable redemption, but Spud Milton is hoping for a smooth ride as he returns to boarding school as a senior. Instead, he discovers that his vindictive arch enemy is back to taunt him and that a garrulous Malawian has taken residence in his dormitory, along with the regular inmates and misfits he calls friends.

Spud’s world has never seemed less certain. He attempts to master Shakespeare, wrestles constantly with God and the power of negative thinking, and develops an aversion to fried fish after a shocking discovery about his grandmother, Wombat.

Spud – Learning to Fly transports the reader on an authentic tragicomic journey, deep into the sublime and ridiculous world of being a teenager. It is the third and penultimate instalment in the series of Spud Milton’s schoolboy diaries, following on the bestselling Spud and Spud – The Madness Continues …

John van de Ruit is an actor, playwright and author who was educated at Michaelhouse and received a Masters degree in Drama and Performance studies from the University of KwaZulu – Natal. His debut novel, Spud, is a publishing phenomenon in South Africa, smashing all local fiction records.