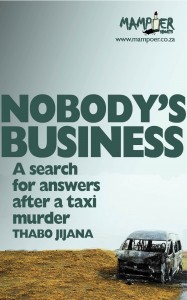 New from MampoerShorts, an eBook publisher, is Nobody’s Business: A search for answers after a taxi murder by Thabo Jijana .

In 2003, Thabo Jijana‘s father was gunned down in a scrap between rival taxi associations who had been forced to operate from a single rank. A decade later, Thabo faces up to South Africa’s most violent industry to try to figure out how and why his father was murdered.

In this searing first-person investigation, Thabo puts a face behind a recurrent tragedy that plagues South African working-class communities. By speaking to the people who knew his father best – relatives, family friends, neighbours and old acquaintances – he tries to fill in the blanks that are the days, months, years that have followed his father’s death. He begins by trying to reconstruct the night the murder took place, but what he uncovers about the ongoing strife that has plagued government’s consistent attempts to formalise this multi-million rand industry comes with more baggage than he expected …

Thabo Jijana was born in Peddie, in the Eastern Cape, not far from the town where the late Steve Biko, founder of the Black Consciousness Movement, was born. His journalism work has appeared in The Herald, Weekend Post and Grocott’s Mail. Thabo’s MampoerShort was made possible through Mampoer’s Mentorship Programme, and was financially supported by the Kgolo Trust.

The same fear and disinclination that greeted me on that first day in Gwejela’s office would persist throughout months of research. A policeman shuddered at the thought that I would want to read a police docket and analyse witness accounts of my father’s murder; taxi drivers were quick to point at each other as soon as I made my intentions known, unwilling to talk about guns and fighting, as though they would be contributing, in some indirect way, to renewed violence. A friend I bumped into on one of my research trips, and who knew my father well, warned me never, ever, ever, to join the taxi industry. “What happened to your father was not pleasant,” said Nozibongo Rhobo with a worried look on her face. Nozibongo and I met at our parents’ church and have known each other since childhood. “Find a job somewhere else”, she counselled.

“Just not in the taxi business.”

The more I spoke to people, the less the story became about analysing the Peddie-King taxi war with an eye towards attempts by government at recapitalisation, than about uncovering what really happened before and after life escaped from my father’s body and the police began their work.

In trying to get to the heart of the event that has haunted my life since 2003, I needed to find out what kind of man my father was. When a liberation struggle hero’s son tries to find out more about a deceased parent who took up arms, joined the struggle and died in exile, he turns to the history archives. But in my case, there are no official archives. So I started by speaking to the people who knew him best – relatives, family friends, neighbours and his old acquaintances – to fill in the blanks that are the days, months, years following my father’s death.

Had the police ever arrested anyone? Had any good been gained from the death my father and countless others such that these lessons could be given proper attention?

Gwejela knew the Peddie-King taxi war as well as any person I could find. But he seemed surprisingly impatient — edgy, might be the right word – given that I would go on to broach the same questions with others who never asked me for so much as a business card to validate my credentials.

I could understand his concern that I might be looking out for people to blame for my father’s death or some other ulterior motive. But I felt peeved at the implication that I was, at 25, too young or, even, in way over my head with this business of taxi wars I knew nothing about. For my mother to travel from my home village, a good, long thirty minutes from the town itself; she would need to miss work and wake up too early in the morning, or wait upwards of an hour for a taxivan at our village stop – just so that she could confirm that she had given me permission to make the visit. It was an inconvenience I would have rather not put her through. (In the villages, where Xhosa custom still holds, children are expected to know their place, so that regardless of your profession, you still regard your elders as superior figures; a parent’s blessing is everything.) As for my sincerity, my looks should have sufficed. I have inherited my father’s sullen eyes and, like him, I tend to speak with my hands when I get emotional. I wore a black blazer with my best pair of chinos and decent-looking moccasins.

“The interview will not take long,” I heard myself protest.

“I don’t think you’re hearing me,” Gwejela said. He meant this as an expression of incredulity. “Come back tomorrow.”