Roger Smith’s latest thriller is masterful – it ensnares the reader until the very last word. Crime fiction at its most chilling – more so as it could so easily be non-fiction.

Wealth insulates Michael Lane and his family from South Africa’s violent crime epidemic until trouble comes from within the high walls of their Cape Town mansion one night when his teenage son commits an act of unspeakable savagery. Lane, joining his wife in a desperate lie to protect their boy – a lie involving the sacrifice of an innocent – encounters no opposition from cops and courts burdened by chaos and corruption, but he sets in motion a bloody train of revenge and retribution that threatens to destroy him and everything he loves. 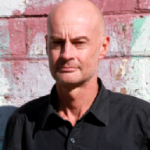 Roger Smith’s thrillers, Man Down, Capture, Dust Devils, Wake Up Dead, Mixed Blood and Ishmael Toffee are published in seven languages and two are in development as movies in the US. His books have won the Deutscher Krimi Preis (German Crime Fiction Award) and been nominated for Spinetingler Magazine Best Novel awards. He also writes horror under the alias Max Wilde.