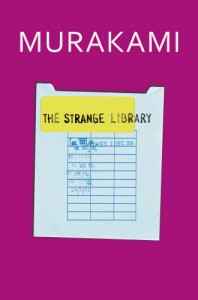 ‘All I did was go to the library to borrow some books’.

On his way home from school, the young narrator of The Strange Library finds himself wondering how taxes were collected in the Ottoman Empire. He pops into the local library to see if it has a book on the subject. This is his first mistake.

Led to a special ‘reading room’ in a maze under the library by a strange old man, he finds himself imprisoned with only a sheep man, who makes excellent donuts, and a girl, who can talk with her hands, for company. His mother will be worrying why he hasn’t returned in time for dinner and the old man seems to have an appetite for eating small boy’s brains. How will he escape? 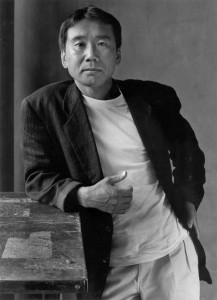 Haruki Murakami was born in Kyoto in 1949 and now lives near Tokyo. He is the author of many novels as well as short stories and non-fiction. His works include Norwegian Wood, The Wind-Up Bird Chronicle, Kafka on the Shore, After Dark, 1Q84 and What I Talk About When I Talk About Running. His most recent novel is Colorless Tsukuru and His Years of Pilgrimage. His work has been translated into more than fifty languages, and the most recent of his many international honours is the Jerusalem Prize, whose previous recipients include J.M. Coetzee, Milan Kundera and V.S. Naipaul.