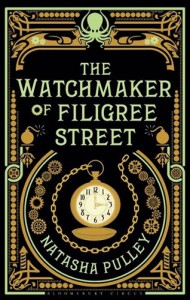 In 1883, Thaniel Steepleton returns to his tiny flat to find a gold pocket watch on his pillow. But he has worse fears than generous burglars; he is a telegraphist at the Home Office, which has just received a threat for what could be the largest-scale Fenian bombing in history.

When the watch saves Thaniel’s life in a blast that destroys Scotland Yard, he goes in search of its maker, Keita Mori – a kind, lonely immigrant who sweeps him into a new world of clockwork and music. Although Mori seems harmless at first, a chain of unexpected slips soon proves that he must be hiding something.

Meanwhile, Grace Carrow is sneaking into an Oxford library dressed as a man. A theoretical physicist, she is desperate to prove the existence of the luminiferous ether before her mother can force her to marry.

As the lives of these three characters become entwined, events spiral out of control until Thaniel is torn between loyalties, futures and opposing geniuses.

Utterly beguiling, The Watchmaker of Filigree Street blends historical events with dazzling flights of fancy to plunge readers into a strange and magical past, where time, destiny, genius – and a clockwork octopus – collide. 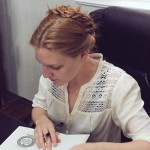 Natasha Pulley studied English Literature at Oxford University. After stints working at Waterstones as a bookseller, then at Cambridge University Press as a publishing assistant in the astronomy and maths departments, she did the Creative Writing MA at UEA. She has recently returned from Tokyo, where she lived for nineteen months on a scholarship from the Daiwa Anglo-Japanese Foundation. The Watchmaker of Filigree Street is her first novel.